Part 1 – When Did Barcodes Begin? 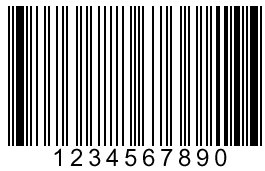 A barcode is an optical machine-readable representation of data relating to the object to which it is attached. Originally barcodes represented data by varying the widths and spacing’s of parallel lines and may be referred to as linear or one-dimensional (1D). Later they evolved into rectangles, dots, hexagons and other geometric patterns in two dimensions (2D).  Although 2D systems use a variety of symbols, they are generally referred to as barcodes as well. Barcodes originally were scanned by special optical scanners called barcode readers; later, scanners and interpretive software became available on devices including desktop printers and smartphones.

Barcodes are on the leading edge of extraordinary things. They have given humans the ability to enter and extract large amounts of data in relatively small images of code. With some of the latest additions like Quick Response (QR) codes and Radio-frequency identification (RFID), it’s exciting to see how these complex image codes are being used for business and even personal use.

The original idea of the barcode was first introduced in 1948 by Bernard Silver and Norman Joseph Woodland after Silver overheard the President of a local food chain talking about their need for a system to automatically read product information during checkout. Silver and Woodland took their inspiration from recognizing this rising need and began development on this product so familiar to the world now.

After several attempts to create something usable, Silver and Woodland finally came up with their ”Classifying Apparatus and Method” which was patented on October 07, 1952. 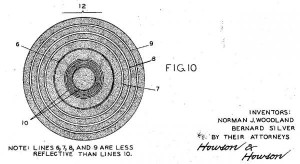 idea that eventually led to the barcode:

Though it took many years to see a real application of their invention, there is no doubt that it marked the beginning of streamlining an otherwise arduous task. Their patent was purchased by Philco in 1962 and then later bought by RCA.

Around the same time, David Collins, a worker at the Pennsylvania Railroad, started noticing a similar need for railroad cars to be automatically identified. In 1959, Collins came up with a precursor to barcodes when he invented a system called KarTrak. He used blue and yellow reflective stripes attached to the side of the cars and encoded a six-digit company identifier and a four-digit car number in them.

The Boston and Maine Railroad tested the KarTrak system on their gravel cars in 1961 and continued testing until 1967, when the Association of American Railroads (AAR) selected it as a standard, Automatic Car Identification, across the entire North American fleet. By 1974, 95% of the fleet was labelled, though the system was easily fooled by dirt in some applications.

In 1966, the National Association of Food Chains met to discuss the idea of automated checkout systems. RCA attended the meeting with their recently purchased rights to the original Woodland patent. The NAFC established the U.S. Supermarket Ad Hoc Committee on a Uniform Grocery Product Code in the mid-1970s. This committee set guidelines for barcode development and created a symbol selection subcommittee to help standardize the approach.

The first commercial appearance of the UPC barcode

was on June 26, 1974 at Marsh’s Supermarket in Troy, Ohio. At 8:01 AM, Sharon Buchanan scanned a 10-pack of Wrigley’s Juicy Fruit gum purchased by Clyde Dawson. The pack of gum and the receipt are now on display in the Smithsonian Institution.

While manufacturers were simultaneously adopting barcode labels, the usefulness of the barcode required the adoption of expensive scanners by a critical mass of retailers. Customer needs were understood better with the implementation of the UPC as well. This was clearly evident when only about 5 weeks after installing barcode scanners, sales in grocery stores typically started climbing and eventually levelled off at a 10-12% increase in sales that never dropped off. It was shown in the field that the return on investment for a barcode scanner was 41.5%. 8,000 stores per year were converting by 1980.

Click the link to read our next article in our Barcodes series.